A hotdog you can eat in the rain! 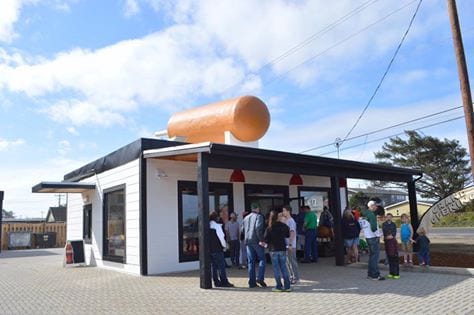 It was Labor Day Weekend, 1939. Husband and wife George and Versa Boyington were running their hotdog stand on the beach, selling juicy hot dogs to tourists and locals alike. It was a simple yet fun way to make a living. There was only one problem: when the rain came, it ruined all the hot dog buns, making them impossible to eat.

After tossing his ruined hotdog buns to the seagulls and lamenting his bad fortune, George decided to come up with a solution for this soggy predicament. How could he make a hotdog that you could eat in the rain? The answer was simple: cook the bun right on the dog! Thus he invented the deep fried flour batter that is used in Pronto Pups across the country, and stuck a stick down the middle to make it easier to cook, hold, and eat.  It was portable, delicious, and could be made in a matter of minutes – this the name “Pronto Pup.”

The Pronto Pup made its big commercial debut from a fountain shop window owned by the Boyingtons in Portland, Oregon.  (The Boyingtons trademarked the Pronto Pup in 1942). As you can imagine, it was a huge hit. More than 15,000 Pronto Pups were sold at the Pacific International Livestock Exposition in 1941. This “weiner dun in a bun” became a staple at carnivals and festivals. After WWII, Pronto Pup shops started popping up all over the nation.

And while there is some disagreement about where the name Corn Dog came from, or if Corn Dogs and Pronto Pups are the same thing, there is no questioning that this ingenious idea of sticking meat on a stick and deep frying it in batter originated right here in Rockaway Beach.