With Halloween right around the corner, that means taking time to fulfill those time-honored traditions like carving pumpkins, hay rides and making caramel apples. But what about a little ghost hunting?

If meeting a bonafide ghost is on your Halloween bucket list this year, look no further than Grumpy’s Cafe in Rockaway Beach, where legend has it that a ghost named Roger inhabits the building – and refuses to leave.

“He was here when we acquired the building,” owner Nikki Sampson said. “We don’t know who it is, but we have named him Roger.”

Roger is best known for knocking things off the shelf, turning the water off if it’s left running, and occasionally moving things. Don’t worry – just like everything here in Rockaway Beach, Roger is perfectly friendly. But Nikki said they do get people visiting their restaurant specifically to get a glimpse of Roger.

While Roger can be a bit shy, there are certainly other larger-than-life reasons to visit Grumpy’s Cafe. Like pancakes the size of your face and cinnamon rolls so homemade even the frosting is made inhouse.

It’s true, the baked goods and platters of breakfast food are the real reasons that have put Grumpy’s Cafe on the map. That and its bright blue exterior sitting on the corner of Second Street and Hwy 101. Owned by Nikkie Sampson and her parents, this family-run restaurant has been serving up laughs and old-fashioned, hometown cooking since 2011.

Nikki and her parents are originally from Missoula, Mont., but settled in Rockaway Beach just over a decade ago. She had wanted a place to sell her baked goods when they found what used to be The Beach Pancake House. “I was originally looking for a place to do a bakery and ended up with a whole entire restaurant!” she said.

Grumpy’s Cafe is definitely well known for its baked goods, courtesy of Nikki herself, but the restaurant also boasts scrumptious breakfasts with huge portions and low prices. If you don’t get here early, you might be waiting to get seated. Locals and visitors alike can’t get enough of the friendly service, inviting atmosphere and finger-licking good food.

And of course if you’re lucky, Roger the ghost might come out to say hello. Just don’t be mad if he decides to knock your fork on the floor.

Grumpy’s Cafe is located at 202 N Hwy 101 in Rockaway Beach. They are open 7 a.m. to 3 p.m. seven days a week. Please remember to follow all state regulations and social distancing guidelines when visiting. 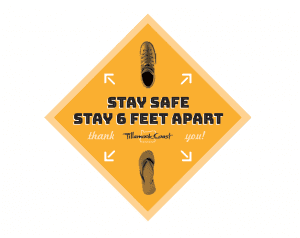 The guidance applies to businesses and members of the public visiting indoor public spaces. As the Tillamook Coast continues to be open, we ask you to stay safe, stay six feet apart, and respect the safety of others.

Most state and county parks are open but may have limited access. Please refer to the following for the most updated information:

Thank you for your cooperation